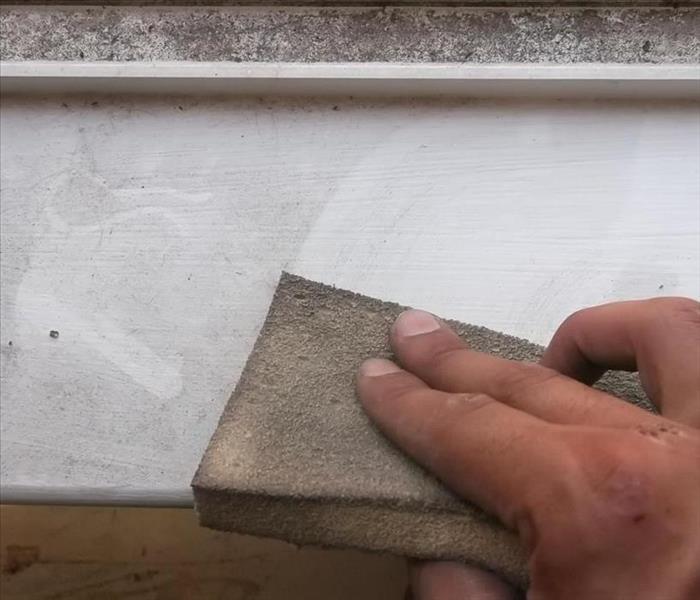 A dry cleaning soot sponge is effective for removing soot from smoke-covered surfaces. It is used to soot from surfaces you do not want to get wet.

A fire is a disaster that can severely damage and even destroy property. There are many equipment and tools used in fire restoration, such as fire extinguishers, fire hoses, thermal imaging cameras, and more.

This article will discuss the most common of these tools - what they do, how they work to control or stop fires - so you know what to expect when you encounter them on your own property.

A HEPA filtered air mover works by sucking contaminated air into one end of the machine, where a filter then catches any type of particulates such as dust or ash that would be present in either smoke or general debris from fire damage before they're expelled back out again through vents on the opposite side for immediate use with minimal risk of re-contamination. The filters inside these machines need to be cleaned or replaced every few months to keep them working at the highest efficiency level.

A HEPA filtered vacuum cleaner is similar in function to a HEPA filtered air mover. Still, instead of sucking up contaminants with an intake on one side, it vacuums any debris and dust into its bag where all particulates are caught inside before being expelled out again on the other end for use without risking re-contamination from dirty filters or vents. These machines need regular maintenance like filter changes or cleanings as well.

Soot sponges are one of the most versatile tools used for fire restoration. They can be squeezed, twisted, and kneaded to let water seep into pores in a soot sponge where heat from an intense oil-based fire will dissolve it away or break these oils down while releasing particles that pose no risk to people when they touch them as well.

Highly absorbent polyester debris pads help reduce the size of large debris by sucking up liquid and trapping any smaller particulates before they can spread out too far. These mats also need regular care, like removing dust and dirt off their outer surface between uses - especially if they'll be reused on site after being left outside for a while.

Fire restoration often requires buckets - both small and large ones that can be used during firefighting operations and general cleanup afterward when the water has been used to put out the fire.

Tools Used for Putting Out Fires

A basic tool in any restoration effort is a fire hose for flooding an area with water and putting out fires. Often, it's just barely enough pressure to extinguish smaller flames. Still, they're more useful as a backup measure against larger blazes that need copious amounts of water or other types of liquids like foam-based suppressants. These hoses must be stored properly so they don't develop leaks or kinks over time which will cause them to lose their effectiveness when needed most because minor dents can become enlarged under continued use.

Often found in restaurants and food service facilities, this system uses salt mixed with soap which generates foam to suppress fires where there is a lot of grease or oil. This type of suppression can be used in any space with heavy metals like lead which would otherwise hamper the effectiveness of water-based firefighting methods.

This sprinkler system connects to your local municipal water supply. It injects saltwater into an area, suppressing flames by lowering their temperature and interfering with the chemical reactions that create them. They are effective for smaller spaces and larger ones because they work on liquid fuel sources, not just solid materials like wood or other organic substances susceptible to thermal oxidation (burning). The only downside is that it takes longer before the flame goes out, so this method isn't recommended when evacuation timeframes are tight.

This sprinkler system releases chemicals into the air that are heavier than air and will settle on surfaces with a high surface area to volume ratio. This makes them especially effective at fighting fires because they can reach up over 20 feet (about six meters). They also have a much broader spray pattern, which is why they're used for quick knockdown or point suppression when you want to get rid of the fire quickly before it spreads.

The downside here is that these systems only work well in small areas since as soon as the dry chemical gets wet from water pouring down onto it, its effectiveness disappears. It's also not safe if there are too many people inside an enclosed space like a room and needs to be evacuated.

The good news is that the dry chemical systems have a much better safety record than water-based fire extinguishers and can be used for large fires or small ones. They also work well on Class A, B, C, and D fires but not as well with E-type fuels like oil or gas because they need to come into contact with these types of materials to put them out.

All in all, though, there are many advantages to using this system over others when fighting a fire, so it's worth considering what equipment you want at your disposal if a disaster happens at home!